17 July 2006
The Lord Will Answer
About a month ago I was having one of those deep conversations with a family member. She said that in her bible study class, the question came up, "What happens when we die?" Someone then commented that if one put the question to a group of ministers they may not all come up with the same answer.

Today the topic came up in my prayer book, "The Lord Will Answer," published by Concordia Publishing House. I received it during Holy Week and have been using it daily.

Each daily page has a small excerpt from Luther's Small Catechism and a prayer. The section I'm in also contains doctrinal points and scripture to back the points up. The prayers come from church sources of all different times. I've seen prayers written by Luther, Gerhard, Columba of Iona, C.M. Zorn, Serapion of Thumuis, Loehe, Augustine, and Walther; other times the prayers have been drawn from the Liturgy of Addai and Mari, the Mozarabic Liturgy, the Book of Common Prayer, and others.

16 July 2006
The Lutheran Carnival
Charles Lehmann of Drowning Myself Whenever I Can begins Lutheran Carnival XXVII with a brief memorial for recently departed theologian Kenneth Korby and a short commemoration of Ruth. He follows up by pointing the reader to a number of notable posts from throughout the confessional Lutheran blogosphere. 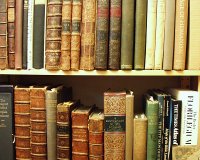 In honor of the 35th birthday of Project Gutenberg, free access to the World eBook Fair is granted through 4 August 2006.

If you've never availed yourself of this remarkable resource, now's the time to do so at no cost to you.

How has it happened that four little words, “This is My body,” have been so variously interpreted, resulting in such a myriad of applications and beliefs?

What is the doctrine and practice of the Lord’s Supper? From the Upper Room to its present-day setting on various altars, Ernest Bartels unravels the history behind this Sacrament, the various practices now in evidence and the doctrines which have resulted. Bartels presents a historical roadmap any novice can follow with ease, yet he is unflinchingly faithful to his own confession along the route. His markers are clear and obvious. Along the way the reader is able to understand where the various actors in history that shape the modern worship wars “fit.” Who was Luther? Zwingli? Bucer? Calvin? Did they affect any current denominations? How? Bartels makes the issue clear. Digging deeper, Bartels opens the history of terms like “closed” versus “close” communion. He also looks behind the issue of using individual cups over the common cup not only among Lutherans, but also among other denominations.

This book is written in a deceptively simple style. By that I mean this: The depth of Bartels’ insights and weight of his knowledge are revealed precisely by the fact that he could write in a manner that is accessible to a wide audience, much like Luther’s Small Catechism. This is a book that could be the source of much study and catechetical discussion in a congregation, especially one interested in the history of the early councils of the church. Bartels brings the reader full circle, uniting the present with the past as una sancta:

We have only the words of our Lord for our Christian life for our salvation. They are enough. Jesus said, “Heaven and earth will pass away, but My words will not pass away” (Matthew 24:35). Christ’s words endure forever. That was certain for the early church and it is certain today.

Bartels, a native of Tecumseh, Nebraska, graduated from Concordia Theological Seminary in Springfield, Illinois. He served congregations in Wisconsin and North Dakota. He held several advanced degrees and wrote numerous articles for publication.

New Carnival, New Host
The Lutheran Carnival has a new host this time 'round. Michael P. O'Conner hosts Lutheran Carnival XXVII. Between summer vacations and the U.S. Independence Day holiday, bloggings been a bit light of late and the number of submissions may reflect that. However, they're of the usual quality, and that's what really matters. The Carnival's featured Lutheran is Bishop Bo Giertz, author of The Hammer of God. So swing by, check the links, and if you haven't already browsed Michael's blog, read through some of what he has archived.

Hammer of God at Barnes and Noble

01 July 2006
Three Discs of Medieval Lutheran Music
Over the last several trips to Houston I was able to check out three CDs. 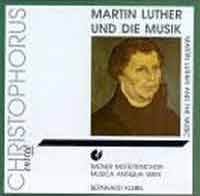 Martin Luther und die Musik has good performances and is well recorded; some CDs like Praetorius' Christmas Mass sound like the gain has been cranked too much on the microphone. Only a few of the eighteen tracks are hymns I recognized. "Ein Feste Burg" ("A Mighty Fortress") is strong, but "Vater Unser" ("Our Father Who In Heaven Above") and "Wir gläuben all an einen Gott" ("We All Believe in One True God") are single stanza organ instrumentals. An Amazon reviewer recommends getting it for "Beati Immaculati", and I agree, the running cadences are beautiful. For congregational singing of familiar hymns, though, I was forced to look elsewhere. 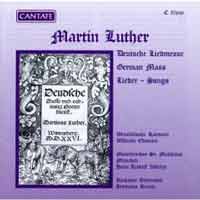 Deutsche Liedmesse (German Hymn Mass) is closer to what I've been looking for. It had gotten a lot of play in my car stereo in Houston. It also is well performed and well mastered. Less people sing "Ein Feste Burg" than in the previous CD, but the higher parts brighten the hymn significantly. Nine of the 14 tracks are recognizable hymns; someone please listen to the Gloria sample from Amazon and tell me the name of that tune. :) "Nun freut euch, lieben Christen" ("Dear Christian People All, Rejoice") has good variety among the verses, employing boy choir and male solo. "Vater Unser" this time is sung and sung well, and classical enthusiasts may give the volume knob an extra touch. This is a great CD for hymns in German. 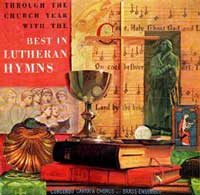 Seeking something auf Englisch I came across a CD published by the American Lutheran Publicity Bureau. "Through the Church Year With the Best in Lutheran Hymns" is an excellent instructional tool. The CD comes in a pocket on the inside back cover of a 8½ in. x 11 in. There are four pages of introductory essays. There are words, melody, and scriptural references for all 18 hymns. I would have preferred that they print all parts instead of just the melody, but the book would have been bigger.