26 August 2006
Carnival Time Again
Lutheran Carnival XXXI came out earlier today at What Did Jesus Do. Stop by to check out a fine sample of confessional Lutheran blogging. 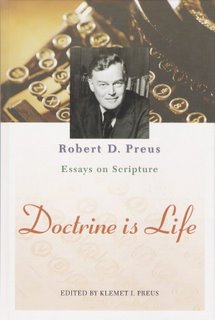 Dr. Robert D. Preus (1924-1995) is considered one of the leading systematicians of of the Lutheran Church — Missouri Synod. He taught and wrote theology for more than 40 years as a pastor, a seminary professor, and a seminary president. Son Klemet Prues has selected 29 articles from his father's many journal writings. Concordia Publishing House presents them in two volumes entiled Doctrine is Life. The two volumes are designed to be able to stand alone — the introduction appears in both volumes.

The first volume, Essays on Scripture, features a cross-section of Preus' research and commentary on the doctrine of holy Scripture and its application in the church today. Preus' comments on the theology of Martin Luther, Karl Barth,and others. He puts his pen to unwrapping the problems with the historical-critical method, and makes the case supporting the Lutheran position of inerrancy and the unity of God's Word.

Preus's grasp of the issues and Lutheran theology AND practice is awe-inspiring. Seldom does he make an academic point without also bringing it down to the ramification of the pastors and people in the congregations of the church. Doctrine is Life: Essays on Scripture contains eleven essays and an extensive catalog of Robert Preus' writings. 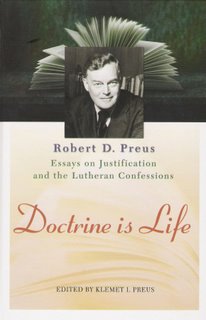 Doctrine is Life: Essays on Justification and the Lutheran Confessionss demonstrates Preus' extensive knowledge of, and love for, the early Lutheran church fathers. In these eighteen articles he faithfully and deftly interacts with the teaching of Luther, Melanchthon, Chemnitz, Quenstedt, and others. He stresses — sometimes with forceful words, sometimes in subtle undertones — the absolute necessity of confessional subscription for the orthodox and faithful Lutheran.

His unwavering stance is demonstrated in his no-nonsense, an no-holds-barred evaluation of fellowship issues which wahsed over U.S. Lutheranism in mid-twentieth-century Lutheranism, issues whose ramifications we are so keenly feeling today. This volume closes with four very different articles. These four articles, under the title, A Word From His Friends, first appeared in a 1996 issue of Logia dedicated to the memory of Robert Preus. The four selected for inclusion are a sermon by David P. Scaer, commemorations by collegues John Stephenson and Kurt Marquart, and a very personal word about his theologian-father from son Daniel Preus.

You may have had the opportunity to read one or two of these essays on orthodox Lutheran theology in one of the journals, and certainly there may be a complete library or two where you could possibly go to read these essays in the journals in which they originally appeared. But this option is hardly available to the majority of us, thus these essays have been largely inaccessible — some for many years. This collection pulls together some of the most siginficant writings of one of Lutheranisms most significant theologians in one place — here in these two handsome volumes. This is a must read for every Lutheran, especially every LCMS Lutheran. These essays lay out the discussions that have shaped what confessional orthodox Lutheranism is (or could be) among us.

Doctrine is Life is available from Concordia Publishing House.
Edited by Klemet Preus