09 September 2006
To Hell with All That by Caitlin Flanagan 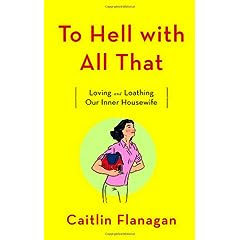 I first heard about this book in the July 1 issue of World Magazine, in which there was a brief description of the book along with an interview with the author. I was intrigued by the interview, as I find the fallout from feminism to be quite the interesting topic, historically, culturally, and theologically.

Flanagan brings a very interesting perspective to her examination of "the central concerns of women's private lives -- weddings, sex, nannies, housekeeping, marriage, children..." There seems to be a growing movement among 2nd/3rd generation "feminists" that the old-guard/1st-generation feminists seem to find increasingly distressing - i.e., that sometimes home & hearth can be the best & most attractive choice, and that perhaps traditional roles actually did serve a useful purpose.

The chapters on modern weddings, housekeeping, marital sex, and "executive" children are the most compelling, as they deal head-on with many of the issues that trouble families & society today. I found the chapters that dealt with the author's personal issues - e.g., nannies & "mother" issues - to be somewhat less compelling. While they were somewhat illustrative of the larger points (better) made in other chapters, they struck me as a bit too self-indulgent & not quite as compellingly well-written as the rest of the book.

Flanagan writes from a self-professed "Evangelical Christian" worldview that is refreshingly consistent throughout the whole book. This, however, should not be taken to mean that there's a whole lot of theological depth anchoring the book. Rather, it would be more accurate to say that a reasonably conservative (if not wholly/obviously orthodox) Christian faith informs this book's foundational points. For example, while many of the points made in the book are quite illustrative of, say, a Lutheran view of the Order of Creation, there was never an explicit statement acknowledging the Order of Creation's primacy in properly defining & managing male-female roles. IOW, while Christianity was mentioned rather regularly, the overall tone of the book struck me as more political/sociological than theological. That said, it was still on more solid theological ground than most of the dreck that's available at the local Barnes & Noble.

All things considered, this is a useful and worthwhile book. I can easily recommend To Hell with All That as a book that is worth the time/effort to find & read.

Outer Rim Hosts Inmost Thoughts The exotic locale of the Outer Rim Territories forms the backdrop for Lutheran Carnival #32. Christopher Gillespie has done an excellent job of compiling others' posts and of composing an informative opening essay on confessional Lutheranism. Thanks to Christopher and to all who submitted.