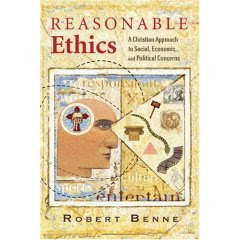 Reasonable Ethics: A Christian Approach to Social, Economic, and Political Concerns was Issues Etc.'s Book of the Month for June 2006. It is a collection of essays by Dr. Robert Benne categorized by his personal story, basic Lutheran ethics, politics, economics, Christian higher education, sexual ethics, and culture/entertainment. His essays were written in the late 1990s and early 2000s.

Benne grew up in an LCMS church but studied religion at Lutheran School of Theology in Chicago and has remained in the ELCA since college. He found himself a "liberal" early on but as the liberalism of the day moved leftward, he found himself sharing opinions with those calling themselves "conservative" today. As a result, I found most of what he had to say agreeable. Benne argues for a "Christian realist" attitude, where we use our reason within the context of sin and Christ's death and resurrection for us.

Dr. Benne's essay on Lutheran ethics is quite good. He describes Lutheran ethics as unique in four areas: Our paradox is that we know that none of us is good, but we are redeemed by God as "exalted individuals." We have a capacity for freedom, love, and justice, but when we choose freedom to do ungodly things, we create a hell for ourselves and others around us. This framework fits for Lutherans of various political stripes.

The author in his political essays notes a difference between the direct action and the indirect action of the church in politics. He is critical of the ELCA taking stances on governmental issues such as the environment. He advises indirect action, the preaching of Law and Gospel in our churches, and then letting the laymen dictate what needs to be done in the legislatures. He notes that when the Roman Catholic church takes a stand on political and social issues, it does so infrequently and usually in a proscriptive rather than prescriptive manner, such as coming out against abortion and euthanasia. As a result the RC statements have more weight and are more effective among its people. A "No" from the church is more effective than a "this is the way God says something should be done."

In his economics chapter, the author uses Two Kingdoms theology (that God rules in the secular world and in the spiritual world, in different ways) to argue for state action in the economy. He does believe that we should not be so beholden to any ideology that we can admit it if a certain economic policy is failing. Economic policy and "justice" is not salvific. Capitalism rewards short-term goals more effectively, whereas some amount of moral and legislative action can make for long-term benefits, he posits. I wish this were the most left view of economics we deal with today! :)

Under Christian higher education he bemoans formerly Christian institutions that are now Christian in name only or less. Exclusive truth has been discarded for every opinion is right. Some institutions have still kept their Christian edge, and he gives Calvin College, Notre Dame, St. Olaf, and Valparaiso as examples. There may be some debates about Valpo, from what I've read in other sources. :) Other institutions are reclaiming what they have lost, and Dr. Benne gives his own Roanoke College an an example.

The ELCA and Bishop Hanson among others are critiqued in the chapter of sexual ethics. They too have fallen under the spell of diversity at all costs to the truth. Premarital abstinence and the teaching of sexual dignity is dismissed for "safe sex." Dr. Benne argues that we can and should stand up to the destruction of marriage in our society. A Christian couple in marriage makes a break with the past, rearranging loyalties, assuming new financial responsibilities, and founding a new home as "two become one". Marriage, like baptism and ordination, come with vows.

In his chapter on culture and entertainment, Dr. Benne gives positive use of religion in sports: to elevate sportsmanship, fair play, respect for the opponent, and civility towards officials. His "Viewing Movies Through Christian Eyes" article is intriguing, putting American Beauty on a statue for the internal bondage to sin of Kevin Spacey's character, causing the lust for a teenager, the character's realization that he has done something wrong, and his redemption and return to grace (before he is shot). Political correctness is more accurately "cultural" correctness, as society rather than politics condemns behavior. It totally condemns Mel Gibson's behavior while giving Bill and Hillary Clinton a free pass with theirs. We have to demand diversity for our ideas rather than social liberals finding people of every race, color, etc., with the same beliefs.

Since these essays were written and different times for different publications, some material overlaps. His ELCA background comes through his examples and his counting of two uses of the Law. He chooses to stay in the ELCA square and speak the truth so long as they will let him. The book is pretty easy to read and at 341 pages will occupy one's time on a plane. I recommend to everyone most chapters of this book. :)