20 September 2007
The Quest for Noah's Ark
Originally posted at Necessary Roughness on September 14, 2007. 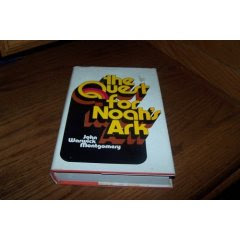 Noted Christian apologist John Warwick Montgomery has been on KFUO's Issues, Etc. show ten times. I picked up one of his books, The Quest for Noah's Ark, from our library system.

Montgomery's book can be split into three: the physics behind an ark as described in Genesis 6:14-16, the writings of early explorers and church fathers, and the documentation of ascents made in the 1900s.

The author explains with a little bit of physics that not only an ark could be constructed, but that it could float and be stable, due to the ratios in its sizes and the resulting center of gravity. He uses this plausibility in the construction of the ark as evidence that the story in Genesis, not the story of Gilgamesh or other stories throughout the world that involve a flood, is the original story. The boat used in the story of Gilgamesh was a cube, and thus could not be a stable shape for a boat.

The writings of the early church fathers show that they really believed that Noah's Ark could still be seen on Mount Ararat. Since none of these people actually went, the section may be interesting for those people already interested in these writers.

Montgomery has made the ascent to Mount Ararat four times; two of which are mentioned in this book, published in 1972. During the first trip he took his son, David, who claimed the record of the highest ascent by someone of that age. The stories of the author and the modern explorers stand on their own as quality storytelling. They tell not only of the sweltering heat when sunny and frigid air when cloudy, but of interacting with the local Kurds and the Turkish government.

Montgomery at the time of this book did not find the ark, in part because another American expedition had soured foreign relations with the Turkish government, and the government forbid exploration near the mountain lake where the Ark was said to have been. Instead, the author does reach the top of Ararat and can see into Iran and Russia from the summit.

At the end of the book, Montgomery explains why the exploration of these types of relics are important. Christianity (and Judaism at the time) is an exclusive religion based in things that did happen. It subjects itself to be potentially and objectively verifiable. The finding of the Ark wouldn't save any souls, but it would improve the historical credibility of the Old Testament and cause people to take another look a religion they may have written off as impossible.

The book is quite an interesting read, even if one weren't Christian. It doesn't answer the question of whether the Ark, now petrified, truly stands on Ararat, but the stories of the explorers and the exploration of the Ark's physics is worth the read. It will arouse one's curiosity. It would be very cool if one day we are able to get up there with the latest satellite imaging, seismic imaging equipment, and other means to show conclusively if the Ark is up there.

Comments:
The search for Noah's ark on Mt. Ararat is based on a mistaken translation. The likely landing place is on a mountain in modern Chad. For the reserach on this go here: